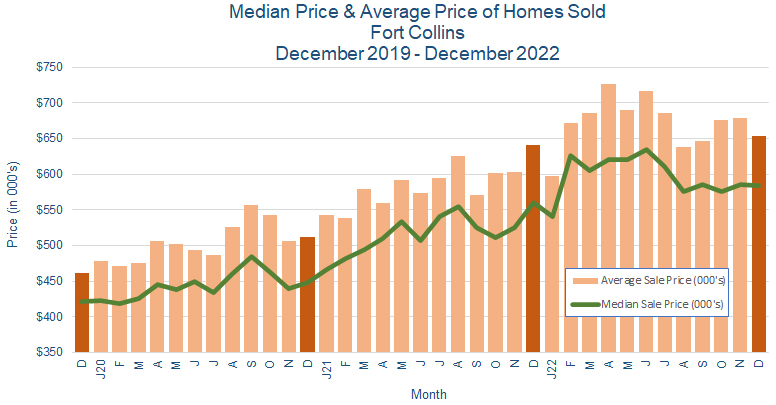 In 2022, Fort Collins CO inventory fluctuated widely, beginning the year with only 66 homes on the market, dropping to 63 in March, peaking at 366 in October, and ending the year at 257 in December. 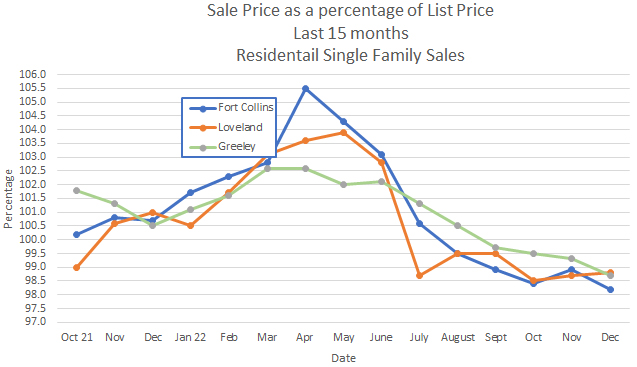 2022 was a wild ride for the housing market. The clearest picture probably comes from the comparison of sale prices to listing prices. We began the year with homes selling at a low of around 100% of asking price, saw that rise to a high of 105.5%, and ended at around 98%.

At the same time that increasing prices incentivized more homeowners to put their homes up for sale, demand began cooling. This was partly fueled by the difficulties faced by potential buyers attempting to negotiate a very competitive market, as well as concerns about the economy and rising interest rates. By mid-summer, the market had made a U-turn, with inventories more than sufficient to meet diminished interest from buyers.

And by the end of the year, the market had gone from a wild ride to a slow one. Fears of recession, continuing rises in the interest rate, and the usual seasonal slowing at this time of the year have lowered activity considerably, as the graphs above show.

So now, as we look forward to a new year, we find a continuing unease about the state of the economy. Will there be a strong recession? Will interest rates continue to rise? What will happen to the jobs market? These and other concerns have significant impacts on what may happen. Currently, there just isn’t enough information to make predictions. Looking at the immediate preceding months isn’t much help – seasonal slowing effects cloud the picture. And while it appears that there are more interest rate increases in store, and a strengthening of recession effects, the economy itself has been stronger than expected.

Hopefully, we’ll get a better feel for the direction of the market as we get more information from the coming month’s real estate activity as well as the financial impacts from coming economic decisions. We’ll do our best to keep you informed.